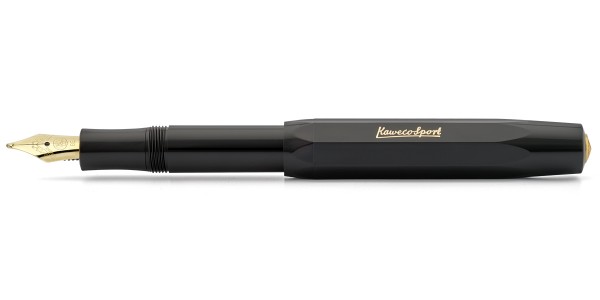 The piano lacquer black Kaweco CLASSIC Sport fountain pen is the most popular Kaweco writing instrument. The elegant sports shape, typical Kaweco with 8 edges, has been available in this design since 1935. The fountain pen is made of high quality plastic, completely made in Germany. The gold-plated steel nib visually matches the classic gold imprint and the gold-colored top logo on the cap.

The Kaweco CLASSIC Sport fountain pen can be filled with standard ink cartridges. Alternatively, there is the Kaweco QUETSCH or the Kaweco MINI converter to fill the pen with ink out of a inkwell.

The Kaweco Sport model was added to Kaweco's range in 1911. At that time, however, this had no eight edges yet. It was round. The current design has been in the range since 1994 and is inspired by the 1935 model. Between 1935 and 1994 there were different designs such as a fountain pen with hidden nib. Sepp Herberger, the German national soccer coach, used a Kaweco sports model in 1954. At that time, Germany became world champion.